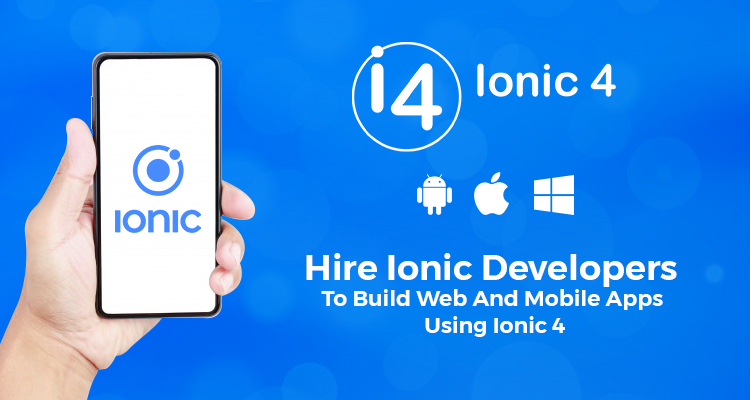 Planning to build a mobile app that follows on every platform and gives a seamless experience to your users? Hire an Ionic developer that can help you deliver a consistent experience across all channels.

Ionic has recently become one of the renowned and favorable cross-platform mobile app development technology stacks. Ionic is not just used among the popular giants but accredit many startups and mid-sized firms as well in app development.

Founded in the year 2012, the motive to develop Ionic was to assist Ionic app developers in utilizing their skillset in a better way. Today, there are millions of apps developed by Ionic developers. Ionic enables the development and delivery of high-quality apps for both mobile as well as desktop.

Since handy devices encourage the invention of new and exciting apps. Thus, the ionic app development framework allows developers to build apps fast and easy as well as more accessible. Ionic app developers have the leverage to build everything they need – from front-end designing to continuous delivery.

The traditional methods require a separate team to develop apps for separate platforms. This complexity either renders exorbitant capital to have your app on all platforms or just comprise a single platform.

Ionic is a brilliant platform that not just empowers the premium app developers but for beginners as well. Hiring an ionic app developer which is highly skillful and consist of years of experience may be a threat to your capital. But, beginner app developers can also build incredible native as well as a desktop-based electron or mobile apps with the help of the Ionic framework.

Because the Ionic platform is an open-source and always welcomes developers. Ionic is committed to a developer-friendly approach and its prime concern is an app developers experience.

Can Ionic Be Used For Progressive Web App?

Again yes, because ionic apps are built with web technologies, they function as efficient as Progressive Web Apps and Native apps. How can you deploy your Ionic app into PWA? In order to deploy the app – the PWA requirements are – Service Worker and Web Manifestation.

One can easily add these both manually but the Angular team has made the process easier making it automatic. With the help of “@angular/PWA,” you can add service worker and app manifest to an app.

Which Mobile Apps Are Build On Ionic Framework?

There are so many mobile applications that are developed with the help of the Ionic framework:

Why To Use Ionic 4 Framework For Ionic App Development?

Ionic 4.0 framework version is to assist the enterprises to address the need for adopting a designing system. Ionic’s centralizes library components which can easily be shared across various teams and projects. This enables the simplification of design and development with consistent brand experiences.

Providing and maintaining a consistent level of efficiency is crucial for all mobile app development companies. It’s even tough with the increasing demand from the consumers to build connected digital experience.

Thus to overcome this challenge, the latest version of the Ionic framework has been refurbished including its UI library using Web components, a set of standardized APIs, compatible with any front-end framework. All these characteristics enable an ionic app developer to build a feature-rich swift mobile app that natively supports any modern browser.

Due to open web standards and flexibility allows developers to use emerging tools, including Angular, React & Vue for mobile app development Ionic Framework 4.0 itself offers powerful tools and services for exceptional digital experience. From Studio to AppFlow to Enterprise Engine, these solutions support the Ionic development ecosystem.

Is Ionic better than React Native?

Not everyone has a big budget to get a sumptuous mobile app development. Thus, Ionic is always for people with moderate to low-budget. Thinking of its budget never underestimates its performance. One of the most widely and most popular cross-platform frameworks builds feature-rich, modern and elegant apps.

React being a more stable framework and ideal for large scale applications. Ionic offers a hybrid approach and is all about native browser apps. Both of these frameworks inherit the same nature – cross-platform. The purpose of the React Native framework is to learn once and write anywhere. Whereas, the Ionic purpose is to write once and run anywhere. Because of its optimum reusability and easy learning curve, it is turning as a preferred framework.

Ionic framework is a dev platform for the entire app lifecycle that enables swift and effective mobile app development.

The mobile apps that are developed on the Ionic Framework leverage the power of stability. The community team of more than 5 million Ionic framework developers is there to offer support. Rooted in open source, Ionic is the most time-tested cross-platform app development for developing mobile, desktop and progressive web apps.