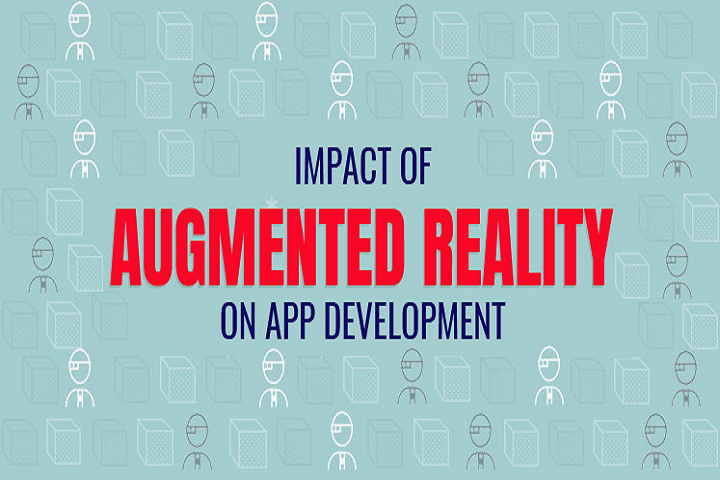 Augmented Reality is the artificial environment that is created by mixing the elements of the digital world in the physical world of the user. In the world of AR, the user does not get magically transported to a new world, that is different from the reality. Rather, it just positions some artificial elements in the physical environment of the user, that enhances the perception of the user’s idea of reality. To know about the Impact of Augmented Reality on app development, you can refer to the infographic below.

Over the years, the concept of augmented reality has been widely accepted by both users and app development companies. Especially, since the arrival of apps like Snapchat and Pokemon Go, the growth of Augmented Reality has reached the height of the sky.

There are 300 million monthly users who generate content using AR apps. By the end of 2018, there will be more than one billion users who would be creating content with Augmented Reality.

Imagine this, you are walking down a road, wearing the AR glasses, that in a while would look like any other normal glasses. While walking, your glasses would automatically project information related to the nearby locations.

For instance, the reviews of the nearest coffee shop, or if you are passing by any important infrastructure, the details about it would pop up in front of you.

This is what Augmented Reality does, it makes the life of the user easier. Even though the spectrum of AR is not as broad as Virtual Reality, and there are major differences between both the concepts, in some ways it is actually better than that.

Augmented Reality gives you a touch of the digital world in your environment. However, it still lets you retain the originality of your actual world.

The gaming sector is what put Augmented Reality on the scale in a broader way. Apps like Pokemon Go took the market by storm, as their user engagement was relatively high. Since then, top mobile app developers have been focusing on developing more AR based apps. This is done to generate even higher customer retention.
Other than Pokemon Go, another example of an AR-based Gaming app is Temple Treasure Hunt.

The sector of education is most prominently benefiting from the arrival of Augmented Reality. The whole concept of using practical exposure to enlighten the students about the world has been fulfilled by AR.

Some other benefits are-

– As studying has now become more interesting, teaching has become more effective.
– The learning process is a more interactive one, hence the information is retained with the students for a longer time.
– Some of the best examples of AR-based apps in the education sector are ZooBurst, Chromeville Science.

More and more professionals are coming to terms with the concept of Augmented Reality. It is helping them complete their daily tasks with less effort.
AR is also improving the level of treatment that the patients are receiving. Surgeons can wear the AR glasses and perform surgeries. They will have all the necessary information in front of them.
Some of the best examples of AR-based apps in the healthcare sector: AccuVein, Saagara

Users can use the virtual fitting rooms to see what suits them and what doesn’t. This saves the time and effort of the user altogether. For the stores, AR is benefiting them as they can show more stock virtually than they can physically.
Some of the examples of AR-based apps in the retail sector- Sephora, L’Oreal, Converse Shoe Sampler

The time that a user spends on his phone using apps on an average is a lot. This is why top mobile app developers are creating AR based apps with the sole purpose of entertainment for the users!
People have become addicted to apps like Snapchat, Musical.ly, that necessarily have no value, but provide a high level of entertainment!

It has become evident that Augmented Reality apps have become the first choice for the users as well as mobile app developers now, but why is that? Why should users prefer AR based apps over others?

The advantages of that are,

The location tracking is only accurate for the users until a fixed scale, for instance, it is not very accurate in indoor locations.

A major issue in AR is of privacy leaking. We know half of the information of a person is available on his Facebook or LinkedIn profile. Any user can have access to even a stranger’s profile, simply by pointing his screen at them.

How does Augmented Reality work?

3D Viewers: Using trackers, or sometimes even without using trackers, real-life 3D objects can be placed in your surroundings. These are usually done by businesses who want the customers to have an idea about how their object would “look like” in their surrounding.

Browsers: In this, your location gets tracked and according to where you are, the information and data related to that place appear on the screen.

Gaming: An example of this is Pokemon Go, where the whole world was considered as a playground, and artificial elements were placed for the users to find.

To summarise, as we have witnessed, as of now almost every industry and sector has been benefiting from Augmented Reality. And that is the primary reason, why Augmented Reality app development is seeing a rise in today’s market. At the rate at which it is going forward, the time is not far when Augmented Reality constitutes a billion dollar industry.