Another reason why developers prefer to use Golang is because of its code. As a developer, when you use Golang, you will find that it is very similar to the C language. However, the simplicity of Golang is the thing that makes it different from other programming languages. Many resources are used for the development of the app, and it is a very lengthy process. But with the help of the Golang framework, you will take sufficient time to develop an improved product. Now let’s discuss the best Golang web frameworks for website development.

List of Top 10 Golang Web Frameworks for Development in 2023 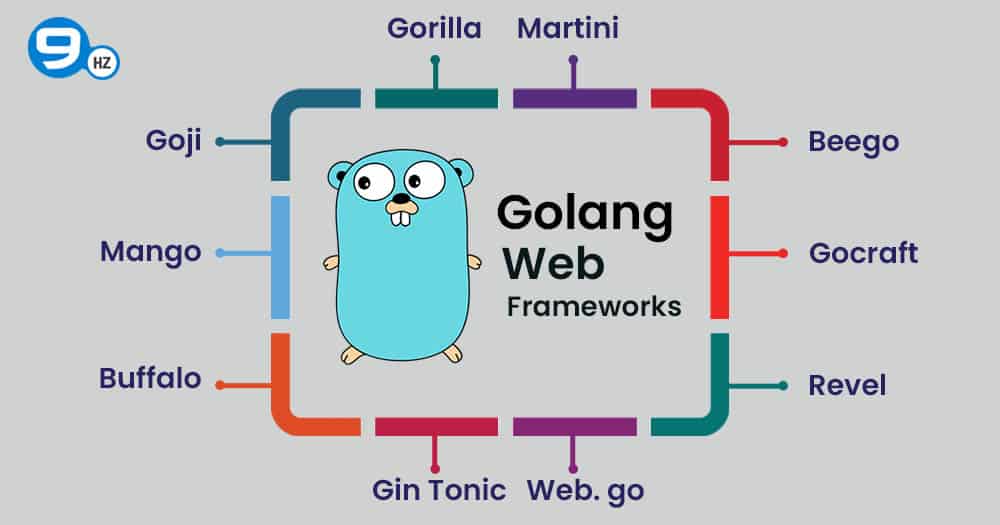 Goji is a very lightweight and speedy web microframework for Golang. It is renowned for its simplicity and its capabilities. It allows the programmers to produce all they need for app development. Goji works as the HTTP request multiplexer because it helps compare the requests that come from listed patterns. It includes the URL pattern, and it’s well-suited to the lean API.

The seamless shutdown abilities and configurable middleware stack of Goji make it the number one choice for web developers. It has many additional features that are very productive and useful for the developers. The web framework is the perfect choice for mobile app development companies because it can work efficiently on web projects.

It is one of the most eminent Golang frameworks for web development that is getting great appreciation from worldwide developers. Moreover, the Gin Gonic is also known for its very discreet framework. The best thing about this framework is that it contains all the essential libraries and features that are important for web development. If you are just getting started with Golang, selecting the Gin Gonic framework is suitable.

You will not find any difficulty using this web framework of Golang because all its features are easy to understand. It is the most preferred frame by web developers because this framework helps them in creating apps more quickly. It makes use of the HTTP routers for the faster development of apps.

Buffalo is the all-in-one framework that possesses all the required features for web application development. The striking fact about this framework is that it can prove to be your helping hand for your very long-run web application development ride. Many amazing features of Buffalo makes it one of the ideal framework for developers. With the help of this Golang web framework, the developers can create web apps faster and quicker.

It is also useful for keeping a close eye on the. HTML and the .go files. moreover, Buffalo allows the users to have live changes in their web application project ideas. It comprises the bolster data migration, so this framework has a huge community of developers.

Mango is one of the most suitable Golang web frameworks because it can work with millions of users simultaneously, but it is not upheld actively. When we talk about the features of this web framework by Golang, its modularity adds more value to it. It can help the users build reusable HTTP components most effortlessly.

You can also decide to have different libraries in this framework, which will increase the various features in the web application development project. The fantastic thing about mango is that it is relevant for all kinds of web development projects.

Gorilla is indeed among the major Golang frameworks for web development, best known as the longest-running Golang framework with a vast community. It can cater to all the HTTP library reusable elements to its users. Gorilla is the most exceptional Golang framework, enabling modularity and scalability, which are included in its prime features. The developers can easily back up things from instinctive support to web sockets.

It is a thriving framework that features the bolster web sockets, and it helps develop web apps most efficiently. Gorilla is also known as the minimalistic framework, along with all these superb features.

When we talk about Martini, it’s more like a particular ecosystem rather than a framework. It is why it can be easily unified with the full support of a third party. One of the most amazing facts about Martini is that it is very light. It is a best golang web frameworks by Golang is tremendously flexible. It increases the developers’ abilities while creating the web application and handling various other roles.

The best thing is that all these things comprise very few overheads in web application creation. Some of the most appreciable features of this Golang web framework are routing, dealing, exception, and the tricks of middleware. Along with these unique features, Martini is also famous for supporting wildcards, regex structure, and variable parameters. The community of this web framework is small, but it is highly active.

Beego is one of the fastest web application development frameworks, and it is famously known as Bee. The striving feature of Beego is that it doesn’t do the integration to the third-party library. Therefore, the developers can use Bee for any alteration in the code without any hindrance. Moreover, this framework has also saved the time of a lot of developers from its logging framework.

It is the reason that the people who want to complete their project in a faster manner make use of Beego. The build-in cache handler of Beego makes it more popular in the web application development world. Since it is a very light programming language, you can also use it to create APIs that can interact with high-end apps. Therefore, it is an ideal tool for developing a small functional microservice rapidly.

Gocraft is a famous Golang framework having striking features. It provides a scalable and quick routing service to web application developers. The built-in middleware of Gocraft helps the developers in writing and adding extra functionalities to the project.

If you want to develop a high-performing web application, this Golang framework is the best option. The specific features of Gocraft make it easier for developers to use and create special applications. Many developers are using web frameworks for development in golang because of their beginner-friendly features.

Revel is that kind of Golang web framework which don’t require the users to install it. The fantastic thing is that Revel always comes on the list of top frameworks. Revel is among the latest Golang frameworks for developers that provide the best features and services. The pre-configured innovative features and functionalities of this Golang framework are exquisite.

The fantastic thing is that it doesn’t need the looks for the configuration aspect. It is a unique Go language framework that is self-sufficient for the needs of developers. In addition, it doesn’t need the middleware, setup, or third-party plugins. The community of this Golang web framework is active and prominent.

This Golang web framework provides the tree routing system instead of a light framework. If you need to do plenty of routing, then Web.go is the ideal choice. The simple and understandable features make the Web.go top choice of developers. Even if you are a beginner, you will also not find difficulty in using this framework. It features bolster tree routing that makes application development work easier for the developers. The last but not minor feature of this Golang framework is restricted to compulsory features.

Which Golang Web Framework is Best? 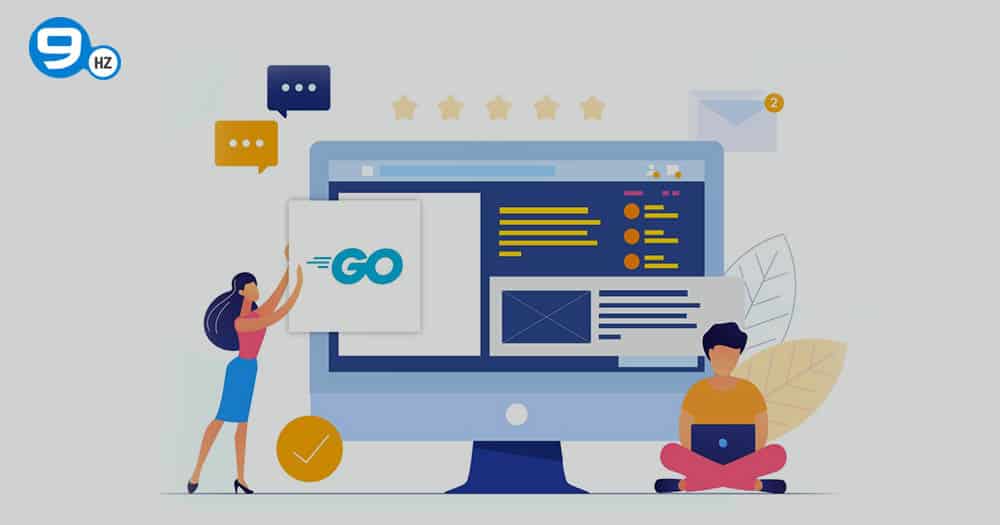 Gin Gonic is the best web frameworks for development in Golang that integrates all the vital features and libraries. It is the perfect option for developers who want to build the best-performing REST APIs. The best thing is that it is 40 times faster than the other Golang frameworks. Moreover, it utilizes the fastest HTTP router for the Golang language. At present, Gin is the most trending framework for creating microservices. It allows a straightforward way of creating the pipelines for request handling where you can easily plug in the middlewares.

Why Should You Use Golang Web Frameworks for App Development? 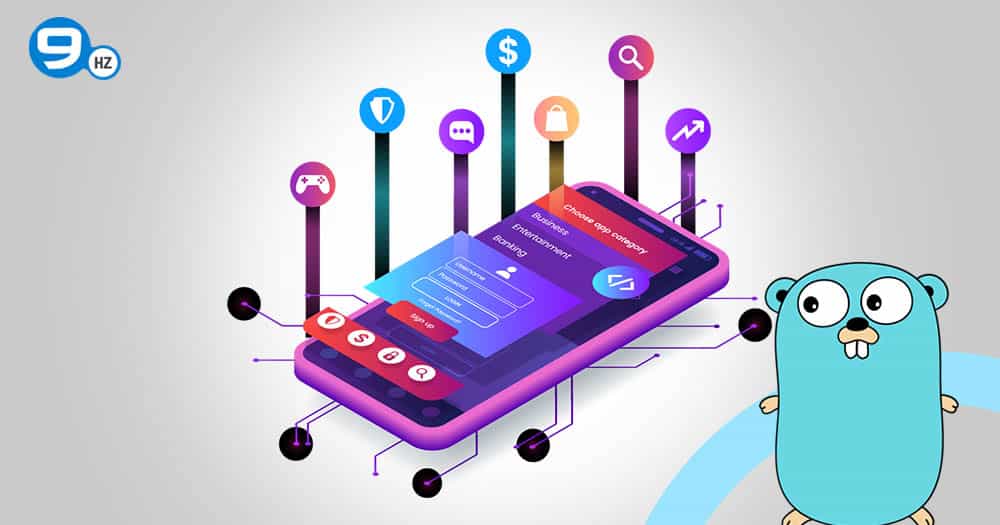 Are you aware that some of the most famous companies such as Google, twitch, fabric, and uber are accepting Golang for web application development? Well, it’s a fact, and the reason for using Golang is its continuous introduction of novel and advanced frameworks. When you use the best Golang framework, it offers you a lot of benefits compared to the other programming languages.

The most significant benefit of using Golang is effortless to understand and learn the programming language. For example, if you are a person who knows the C language, then you can quickly learn using Golang because they both are similar. The easy-to-learn features are the essential reason developers use Golang to develop their web applications.

It is a compiled language that signifies that the codes are directly interpreted into formats that the processor understands. As a result, Golang is a faster programming language than other languages such as python and java.

One reason the developers need to use Golang is its capability of supporting concurrency. This programming language comprises Goroutines functions which can run independently. Moreover, it takes 2kb of memory, which makes it scalable at the time when there is a requirement for running multiple concurrent processes.

Q.1 What is the Cost of Developing a Web Application?

The cost required for developing a web application depends on plenty of factors, including the platform of development, functions, security, maintenance, knowledge, applied strategy, etc.

Q.2 Do you Need to Use the Web Framework for Golang?

Some people might say that Go is not the right option for web application development. But it is not true because language truly doesn’t depend on any type of extensive framework. Moreover, the Golang comprises a great standard library that includes all the tools and functionalities required for app development.

Q.3 Is it Appropriate to use Golang for Every Application?

The answer is no. however, Golang is entirely suitable for most applications. Still, some applications don’t require high-quality performance, or they are much better to create by using other programming languages like C, Java, or C#.

Q.4 Which other Companies are Using Golang?

The use of Golang is growing all across the world. Some of the major cloud infrastructure projects created using Golang are Kubernetes, Docker, and many more. The cloud projects and the companies like Google, Uber, Dropbox, SoundCloud, and twitch.

Q.5 Why is Golang so Popular in the Web Application Development Area?

Q.6 What are the Best Golang Frameworks for Application Development?

Some of the most popular Golang frameworks for website development are Gin Gonic, Beego, Goji, Gorilla, Mango, Buffalo, and Gocraft.