How to Create an Android Game? [Complete Guide]

It’s no secret that the game market is booming. Over the last couple of years, android games have broken records and made billions in revenue. And not merely “on the sly,” but at a breakneck pace. In fact, research suggests that players downloaded 82.98 billion mobile games in 2021. And this number is only rising.

On top of it, Android has maintained its position as the leading mobile operating system worldwide. It holds a 71 percent share of the mobile OS market. It’s evident that there is a considerable appetite for android mobile gaming.

If you, too, are fascinated by games and wondering how to create an android game of your own, you have landed on the right page. This blog will act as your beginner’s guide and walk you through mobile gaming and the steps you need to take to get your game app from ideation to launch.

What are Android Games? 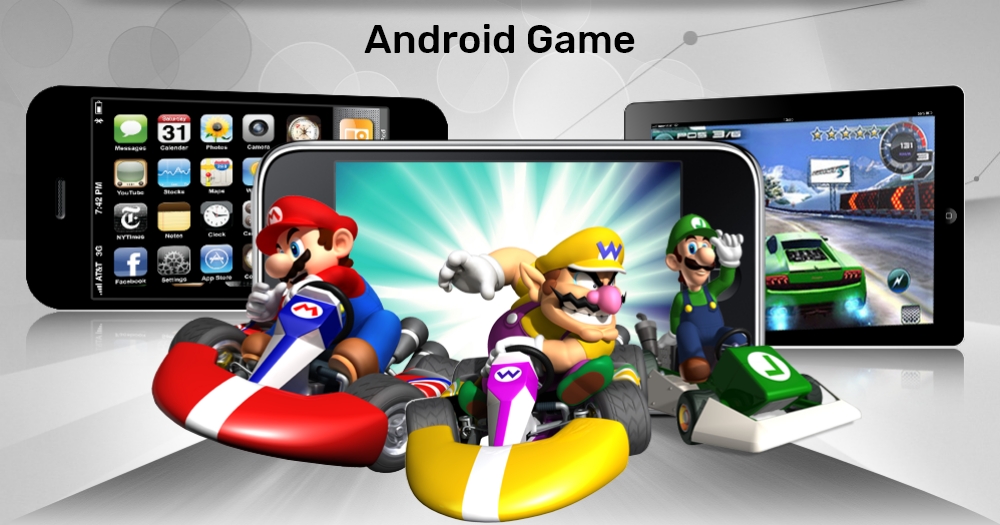 Android games range from basic to sophisticated (3D and augmented reality games) and users can download them from Google Play Store.

With many investors and developers coming out with outstanding games, the mobile gaming industry will present many business opportunities over the next period. It is predicted that 71% of Google Play’s revenue is estimated to come from mobile games by 2025. That said, the mobile game market is full of possibilities.

Want to Create Your Own Android Game?

What Types of Android Games Can You Create?

Increasingly, more and more players are using mobile devices to play android games. It’s convenient, simple, free, and fun. Furthermore, it allows gamers to play games wherever they are. Therefore, not only will Android game development enable you to earn money, but it will also help you get a wider reach.

Here are some types of mobile game developers can look forward to developing.

How to Make an Android Game? 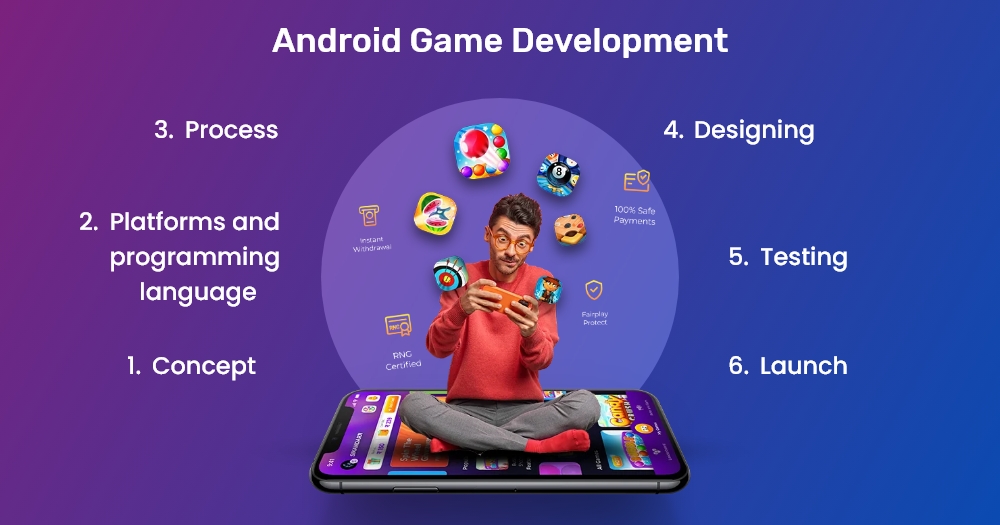 Here are a few steps you need to take to make an android game.

Planning your game requires the most challenging work, but the following steps become more manageable once you have a plan. When you start building your game, write down your android game ideas, come up with unique characters, think about a compelling and thrilling plot, and choose the type of gameplay that would make your game fun.

It is always best to start with something relatively simple. Always tend to choose the game styles that can minimize the amount of time and work you need to invest.

Once you know what type of game you want to create, you must decide how to make it.

There are a lot of platforms and programming languages depending on your skill level and the nature of your game project (discussed in the upcoming sections). The vast majority of developers generally opt for either Unity or Unreal when create an android game.

During this stage of development, you can also begin scripting code for your game.

To keep your integrated development environment on the right track, start with the basic mechanics and rules of play.

This is when you must decide whether your game will have 2D or 3D graphics. Although creating graphics and sound can be a lot of fun, they can also be time-consuming and challenging at the same time. If you have art and graphic design skills, you may wish to handle the game design part yourself. If not, you can outsource a game design company or hire a freelance graphic designer.

Once the graphics and levels are in place, all that’s left is to create some kind of interface. You’ll need a title screen, a menu, a way to save your progress, and so on.

Every game must be tested thoroughly before it is released. Once your game is developed, you must refine it to create an enjoyable and memorable experience. Here is when the role of QA testers comes in. The Quality and Assurance testers test gameplay from a technical standpoint. They will write up detailed bug reports and take note of any crashes.

Below are some common tweaks that will ensure your game is well-received by players:

One error novice game creators frequently commit is striving for perfection in their development work which delays the game’s release. While testing and improvement should not be skipped entirely, releasing the game as soon as possible is preferable. You can update the game and improve it if it attracts an audience.

Additionally, you must allocate money for the game’s promotion if you intend to profit from it. Suppose you can handle it, leverage different channels, and promote your game. On the contrary, you can also outsource it to a mobile game marketing agency to take the burden off your shoulders.

Benefits of Developing an Android Game 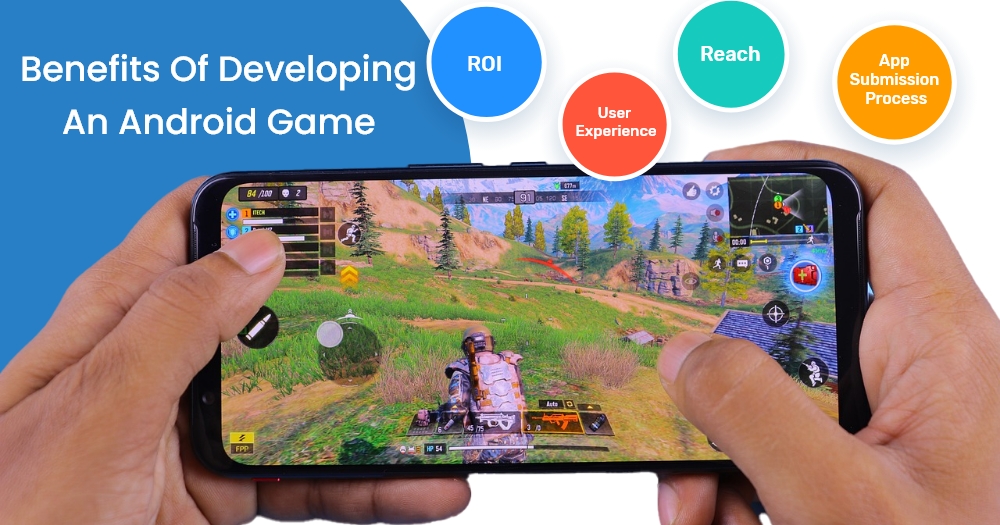 As a developer, you can make huge profits by contributing a small chunk of money and creating innovative and ground-breaking android games.

Here are some compelling reasons why you should create an android game.

Unquestionably, Android dominates the number of worldwide smartphones in the hands of users. It possesses over 70 percent of the market’s smartphones, tablets, and other mobile devices.

Also, android game designs are not limited to single mobile device use. There is a wide range of android devices available today. Thus, mobile game apps have the potential to reach a vast number of users worldwide. A single mobile phone-making organization does not entitle to it.

The android platform delivers interactive, bright, and enjoyable mobile games to its users.

With android game apps, you can rest assured that it won’t require huge expenditure. Moreover, the development of game apps is rewarding. Without making a vast investment, you can get profitable returns and businesses.

The submission procedure in the Google play store is shorter than the app store. It is also much more relaxed and you can submit your game easily. 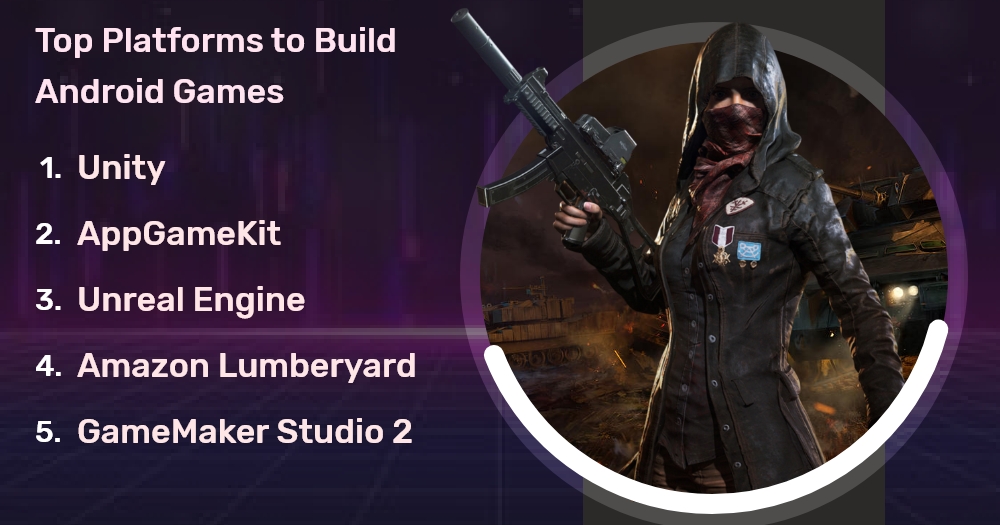 Developing a game looks like an uphill struggle. On the contrary, the efforts can be rewarding if you know the right software and technologies to build your game.

Unity is one of the most widely used game engines for creating Android games. It is a cross-platform tool that Unity Technology has developed to assist you in making your own games. It has a leaner learning curve and facilitates the development of incredible 2D and 3D gaming.

Additionally, it offers a large selection of assets and allows users to import assets for several 3D programs, including Blender. If you intend to create a game for the first time, Unity may be the best game engine.

Another platform that makes it simple to create an android game is AppGameKit. You may find solutions with this program for every type of Android game. Anyone who is a novice or seasoned Android developer can utilize this platform. It employs coding similar to C++ and is a very user-friendly game engine.

The best feature of AppGameKit is that it is cross-platform, making your game instantly available for all other platforms as well.

Unreal engine is another of the best software to create an android game. It is ideal for people who want to learn Android studio, yet are newbies. You needn’t be skilled at programming to work on this tool, yet, you must be aware of Java and Android SDK. It contains several user-friendly features, as you will discover if you use it.

Unreal Engine’s UI makes it extremely simple, which is another benefit. You can actually learn how to create fantastic, eye-catching 3D visuals for your program and take pleasure in doing so.

It is a well-known tool for game development that Amazon officially released. This tool is unquestionably helpful if you want to develop an Android game application. You can utilize a lot of the free tools on there to build your game application. With the help of its Twitch connection, users can construct a visually appealing gaming application.

Yoyo introduced a platform with GameMaker Studio 2. Games that need 2-D visuals are created with it. The best feature of this program is the Drag & Drop functionality it offers to users.

This feature allows you to create an android game in a concise amount of time. Additionally, employing this program only requires that you have an idea for your game; no additional funds are needed.

How Much Does It Cost to Develop an Android Game? 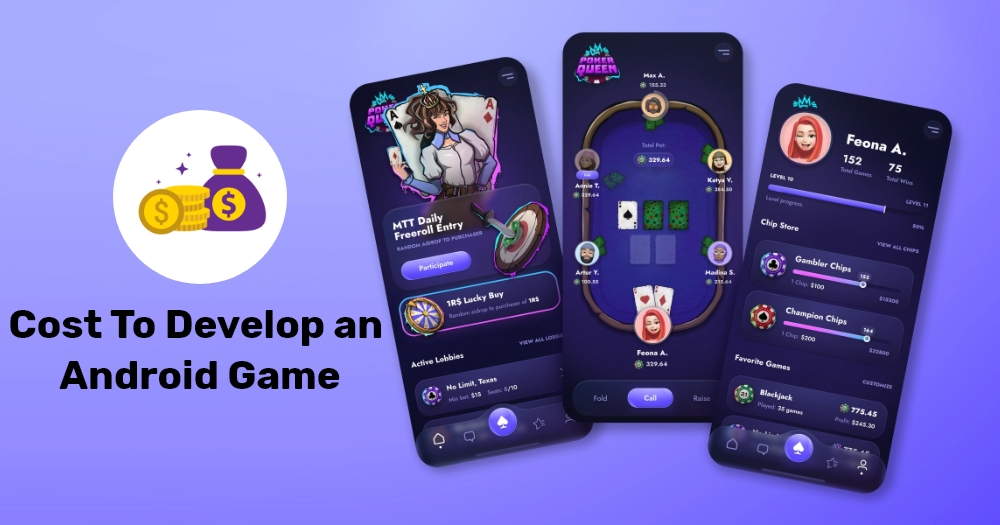 An average android game development costs range around $5,000 and $50,000, from start to finish. However, if you want to create an android game with all the advanced features, supporting multiple mobile platforms, the cost will be higher based on the functionalities.
The actual cost depends upon a lot of factors which are:

Developing an android game can appear challenging (especially for first-time game developers). However, everything can become effortless with the ultimate focus, a solid idea, the right tech stack, and an expert team of designers, testers, and developers.

Even if you might desire to do things on your own, you shouldn’t ever be afraid to accept assistance. Turn your game ideas into reality, team up with the best mobile game development company and take your game plans to the next level.

Want to Convert Your Android Game Idea into Reality?

1. What is The Process of Android Game Development?

The quality of every Android game depends on the tools and techniques used to create it and, most importantly, the development process used to develop it. Hence, you must follow the industry’s best practices to successfully create and launch game apps. In general, android development is a 7-step process (outlined above) that starts with defining your game concept and ends with the game’s release.

2. How Can You Make an Android Game With Unity?

Unity is one of the best platforms for developing an android games because it reduces the learning curve and will save you a lot of time. The platform helps you with a lot of information and documentation to start your game development journey.

3. How Much Time Does it Take to Develop an Android Game?

Developing an android game project can take several months to several years. Like the costs, the time taken depends upon factors such as game complexity, the software chosen, the team required, finalized graphics, and much more.