Coding is the base on which the world of technological systems sits on. For a lot of people, coding happens to be the first step in their video game development careers.

The classic video game programming language for developing games. It has been used for decades by coders to write codes for games.

Remember vice city and how you could spawn a tank on the road with the help of some cheat code? It was coded in C++. What about Counter-Strike? You Could choose between counter-terrorists and terrorists in the game. Again, it is built on C++.

It has to be kept in mind that it is not an easy language to learn but once learned, the language opens the door for coders to work around Unreal, PhyreEngine from Sony, etc.

Microsoft originally developed C#, and since then, it has created a space for making games on Xbox and Windows. One of the oldest game design programming languages, C# is an intuitive language that anyone can learn. Almost all the games that are built over C# are created on platforms like unity engine. This language is not best suited for beginners. C# maintains an XNA framework.

XNA framework is nothing but a set of runtime environments and a set of tools. This makes the language suitable for creating games for Xbox and windows. C# is also considered to be a safe game programming language. This means that the game will not have any unexpected behavior.

If you are just into making games and coding for them, JAVA is the perfect language for you. Java has been around for a while, and apart from creating the best front-end designs, it can also be used to create games. Java happens to be the easiest game programming language. The maximum number of games built on java is operational on android. With the use of flash, coders can also create web-based games with java.

JAVA uses some object-oriented programming principles and can be run on JVM or Java virtual machines. The code can be converted into a generic Bytecode, and then it can be run on any system. Hence, java is one of those game programming languages that hands the video game developers an opportunity to design games for any system.

One of the most popular programming languages, javascript, is for creating interactive games. This programming language is relatively easy to integrate computer codes with web tech like CSS and HTML, etc. This leads to an increase in cross-platform mobile games.

The language has already provided its capacity to create top-notch games. This is because the language has a lot of top javaScript frameworks and libraries. Under these frameworks, there are a lot of game engines that programmers can use.

Apart from being open source and free, a lot of tools work within the web editor that helps in the fast execution and rendering of 2D and 3D elements.

HTML 5 is one of the most common programming languages in the field of gaming. A lot of mobile games that we play today are coded on HTML 5. It is easy to create an easy web-based game with the help of javascript.

HTML 5 is easy to learn and does not require the programmers to have extensive knowledge of algorithms and hence, it is becoming a popular option for people who develop games. Furthermore, HTML5 can be interchangeably used with JS in some cases. Also, CSS3 and CSS can be used in conjunction with HTML 5.

This is where SQL comes into play. It has many back-end processes that include achievements, saving progress, and a lot of ways to measure the data in a game. These languages can come in handy if the video game developer is solely aiming for the web game market. 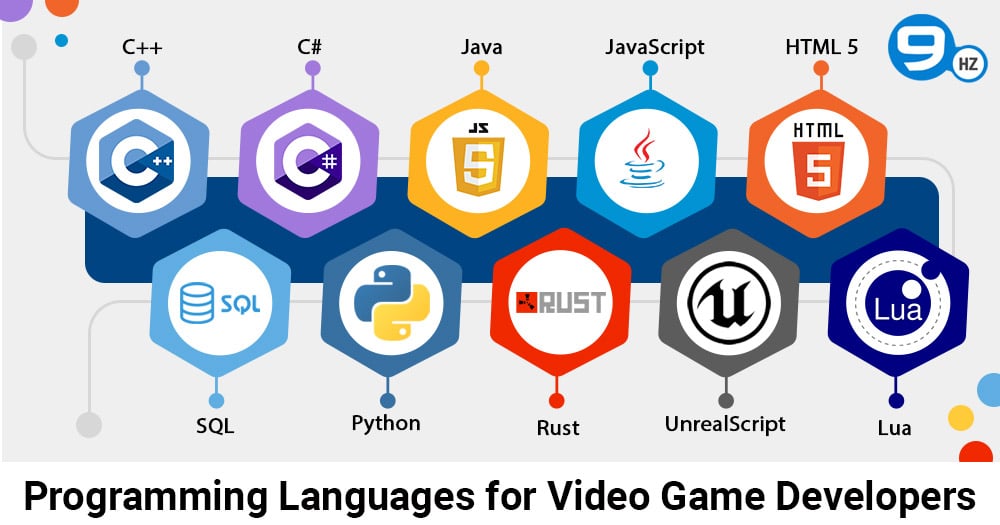 Python is a programming language that has almost replaced a lot of other languages and has spread from gaming to several other areas of the industry. For example, when there are applications in the fields of data science that use python, there are a lot of games that are built-in in python as well.

Python shortens the code to a minimalist level, and the libraries help in creating the best version of a product for the coder. Python is one of the easiest game programming languages, which helps the coder to make a faster and more reliable product for the end-users.

Rust is being called the worthy successor of C, created by the Mozilla foundation. It provides the programmers with an object and data-oriented approach, which helps the programmers in game development.

The language helps in overcoming the problems that the programmers have had with C and C++. The issues with these languages were concurrent programming and memory errors. This is seen as the primary benefit of the language.

Rust comes with a borrow checker. This part of the compiler makes sure that the references do not exceed the data to which they refer. This allows the programmers to eliminate a lot of different memory problems. Such problems are detected at the compile time.

Unreal is a scripting language that works for the very famous unreal engine. It has the complex features of object-oriented programming and a lot of different inheritances. The language supports almost all the major gaming platforms like windows, Steam OS, Mac OS, and PlayStation VR.

The language hosts one of the most simple structures and syntax and is becoming one of the most popular languages for the gaming industry. Lua is a multi-platform scripting language that is used by several gaming engines that utilize Lua as their primary game design programming language.