Is Unity Good for 2d Games?- Best 2D Games Made with Unity

As we all know, Unity is a cross-platform game engine created by Unity Technologies. The engine was first announced and released at Apple Inc’s Worldwide Developers Conference in June 2005 as a Mac OS X-exclusive game engine. As of now, there are more than 25 platforms through which the engine has been extended.

The Unity engine is well versed in creating 3D, 2D, AR, and VR games as well as simulations and other experiences. There are various other industries apart from gaming like film, automotive, construction, and architecture, etc. that have adopted this engine due to its advantages. The latest Unity version is version 2020.2.2 that was released in January 2021. Let’s find out is unity good for 2d games and top games made with unity.

Is Unity Good for 2D Games? 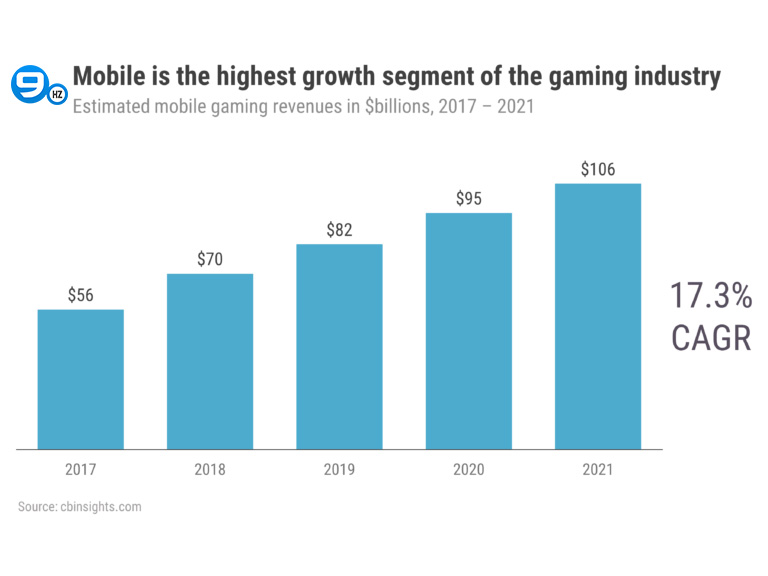 Unity is a popular game engine that is used for creating 2D as well as 3D games. Initially, there was hardly any native support for 2D games, and the employment of the workarounds was being done by the developers to get the 2D perspective. However, Unity came with native 2D tools at a later stage making it easier for the game developers’ community to develop 2D games. Unity 2D implies when the developer uses 2D native tools or 2D game development. Therefore, you can use Unity for the entire development process in order to create a fully customized 2D game. 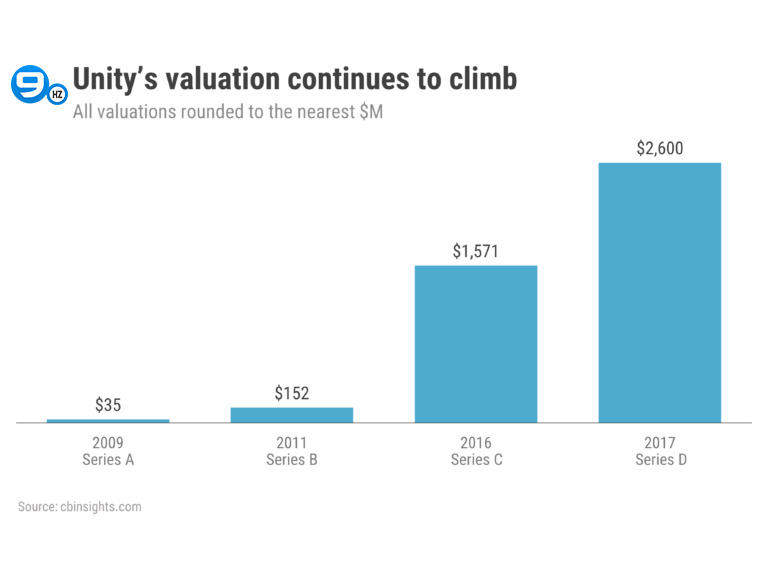 11 Best 2D Games Made with Unity

There has been more than a decade since Unity is being used as one of the most popular networks in Game Development. This is the right time to explore reasons to hire a unity game development company. It has helped and assisted millions of developers to create masterpieces. Here we have curated a list of some of the successful 2D Games Made with Unity:

These were some of the most popular games played and appreciated by millions of users worldwide.

Unity 2D is packed with tons of features which eventually makes the entire process of game development entirely easy and fun for the game developers. This section will throw light on some of the best features provided by Unity 2D.

The animation in Unity is considered as one of the most crucial elements of any 2D game and Unity 2D simplifies the entire 2D animation process. The interface is simple along with controls that you can make use of easily to create a smooth layout. Also, you can import the PSD here, so that you can access the layered artwork directly from the software.

Native support for 2D lights is also provided with Unity 2D which helps in providing full light control in the game. You can easily control the various parameters by using Unity 2D like colors, intensity, effects, and fall-off, etc.

This is yet another important feature that comes along with Unity 2D which simplifies the entire game development process. Tilemaps is a feature where you can easily formulate grid-based worlds without any limits. This signifies that you can create large grid-based worlds easily.

Shaders are very important when it comes to 2D games, but the most difficult part comes when you have to perform the coding aspect of it. This takes a lot of time and effort. However, Unity is very helpful in making things easier by allowing you to create the Shaders visually. All you have to do is to join the nodes on the network graph for creating the Shaders which will save your time and efforts.

Unity 2D has built-in support for Sprite Shapes which empowers you to create organic 2D environments very easily directly from the platform. Here, you can also import the art assets for your 2D-related projects in the software and it comes with built-in support for Vector and Raster formats. Also, it gives you complete freedom to make great shapes using your creativity.

Amazing graphics was one of the biggest challenges with retro games as they were often made in 2D. Unity has a “Pixel Perfect Camera Component” feature which makes sure that the pixels in these games are always crisp and clear. The calculation of the right viewport as per the resolution to adjust the rotating sprites is done automatically with this feature. This ensures that the players keep getting a clear pixelated look. 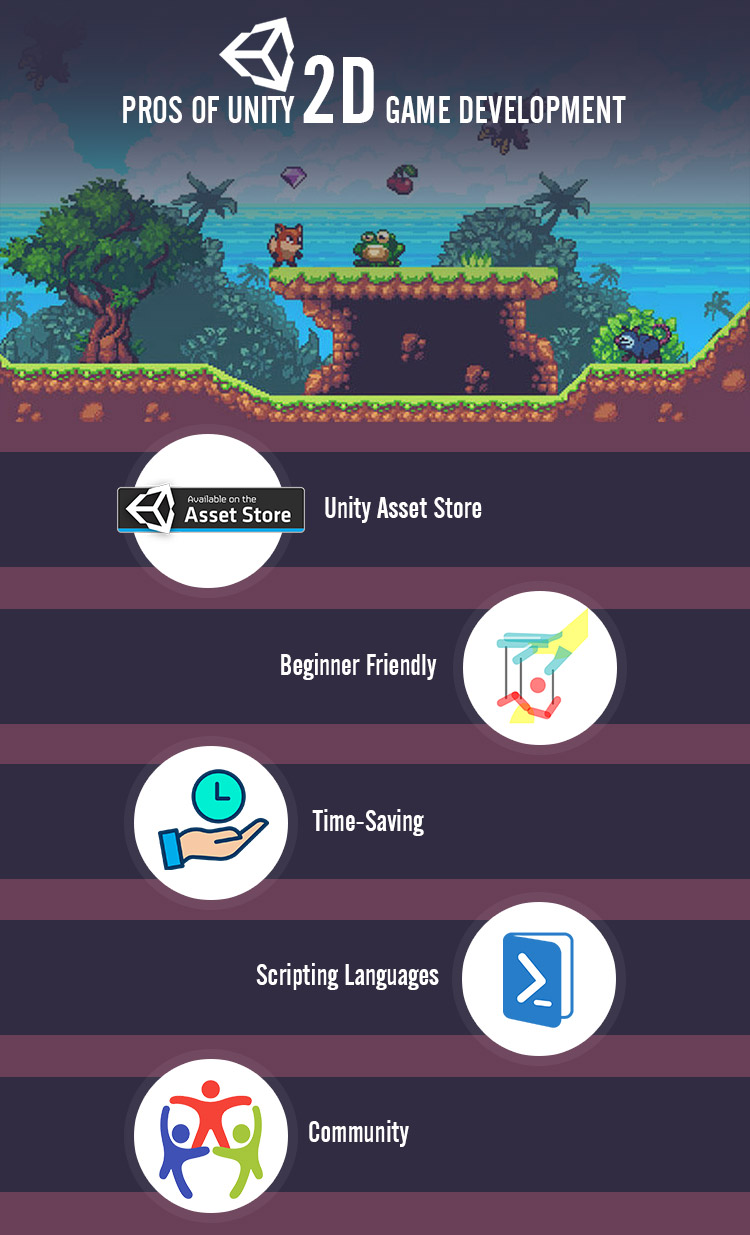 Now as you are quite familiar with the various features of Unity 2D, let’s understand the advantages or pros of using Unity 2D game development.

One of the biggest perks of using Unity is its Unity Asset Store that comes with multiple components and resources which you can utilize in your 2D game. More than 12,000 items come along with the Unity Asset Store and a vast majority of those items are specially designed to create 2D games. So choosing Unity for 2D game development means having a large resource at your disposal which will eventually simplify the whole process.

This is the second but very important advantage of the Unity framework that it is beginner-friendly. The framework works great for beginners as it comes with simple controls and loads of pre-designed assets that make Unity a great tool for beginners. As a developer or user, you might also like to learn about the advantages of unity 3D game development.

With Unity, you can save a lot of your precious time. This is because it is designed in such a way that it helps you save your time. As a beginner, you get access to Unity Asset Store where you can find many pre-made assets that can be very useful in your games. Having said that, for handling technical stuff like animation, lights, sprites, etc. Unity comes with proper support and simple controls. This makes the whole process much easier and smoother than ultimately helps in saving a lot of time.

With Unity, you can perform scripting using popular languages like JavaScript or C#. These languages are quite popular in the current scenario and also quite easy to get started with.

Unity for game development has its vast community and that’s what makes it a great pick for your dream game development project. A vibrant community allows you to get instant support and advice from the experienced developers out there. There are tons of active communities running of Unity framework on multiple forums including Reddit, Facebook & YouTube. On these forums, you can learn regarding that various issues and other important things from experienced developers. There is a lot of beneficial content available for you on these portals.

That’s it for now, hope you have gained useful information from this article. In the end, let us conclude by saying that the capability of Unity 2D to create exciting 2D games is undeniable. Although there may be some disadvantages also, clearly, the advantages stand way ahead of the disadvantages. Also, we have proof in the form of some of the popular games such as Forma.8, Flipping Death and Hearthstone.

All these games were a product of Unity 2d. Hence, if you are also looking for a reliable platform for 2D game development, then Unity 2D is a promising option for you. You can contact us as we have experienced Unity game developers in our game development team who are well versed in their craft. You can rest assured that you will get a fine quality product from us.