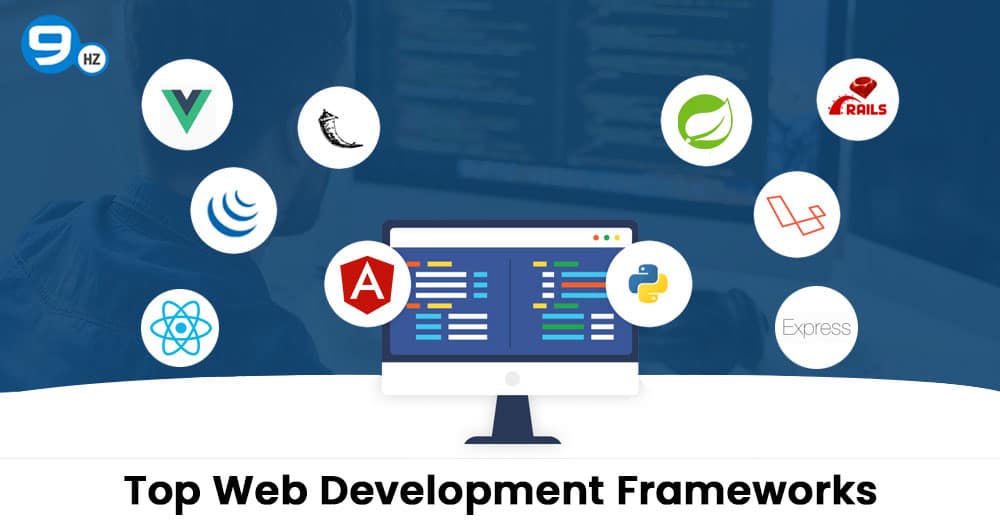 Are you done with Python’s basic programming or with any other language? If that’s the case and you want to update your skills, then we’ve got you covered. Here learning Web Development Frameworks to advance your profession as a backend and front-end web developer comes into the picture. To begin your experience, select one of the main web development frameworks listed below.

Almost all IT firms use web frameworks to construct dynamic online apps instead of writing the code in a specific programming language from scratch. Choosing the most popular web frameworks is difficult, especially when there are so many to choose from.

That’s why we have handpicked the top web development frameworks 2021, including both back-end and front-end frameworks.

What is a Web Development Framework?

Frameworks offer developers the tools and functions they need and the rules for designing the architecture of websites, apps, APIs, services, and other solutions. As a result, you can quickly construct the skeleton for your project and then expand it based on the needs.

A framework may also contain utility programs, code libraries, scripting languages, and other tools to aid in creating and integrating various components of a major software project.

Therefore, web development platforms are customizable, which means you can take ready-to-use templates and components and modify them to your individual needs. You may also integrate your own code into the platform.

Any web application of a backend or server-side component and a front-end or client-side component. As a result, there are web development frameworks for both the frontend and the backend.

These are in charge of the user interface, which is the visible portion of a website or application with which end users interact. They are built with frontend programming languages like HTML, CSS, and JavaScript and deal with UX/UI design, templates, code snippets, SEO optimization, user interaction management, and more.

These are in charge of the hidden parts of a website or application with which developers communicate. They are concerned with the operation of the server and database, solution logic and architecture, routing protocols, data security, authorization choices, and other issues. Backend programming languages such as.NET, Ruby, Python, Java, and PHP are used to build these systems. 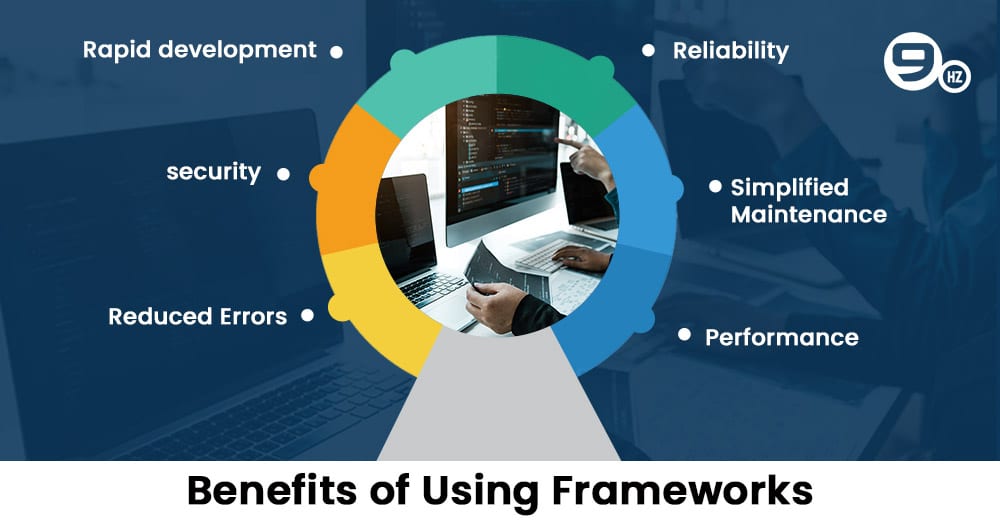 Why do the majority of developers rely on frameworks? In a nutshell, since they make it easier to create and maintain web projects. The below are some of the benefits of using the most popular web frameworks, have a look at them.

A framework is now required for the building and upkeep of websites. With so many options accessible, deciding on one becomes quite tough. We have collated the most popular web frameworks depending on their type, i.e., frontend and backend, together with their numerous key features, pros and downsides, and so on, that are utilized nowadays for simplicity of development. 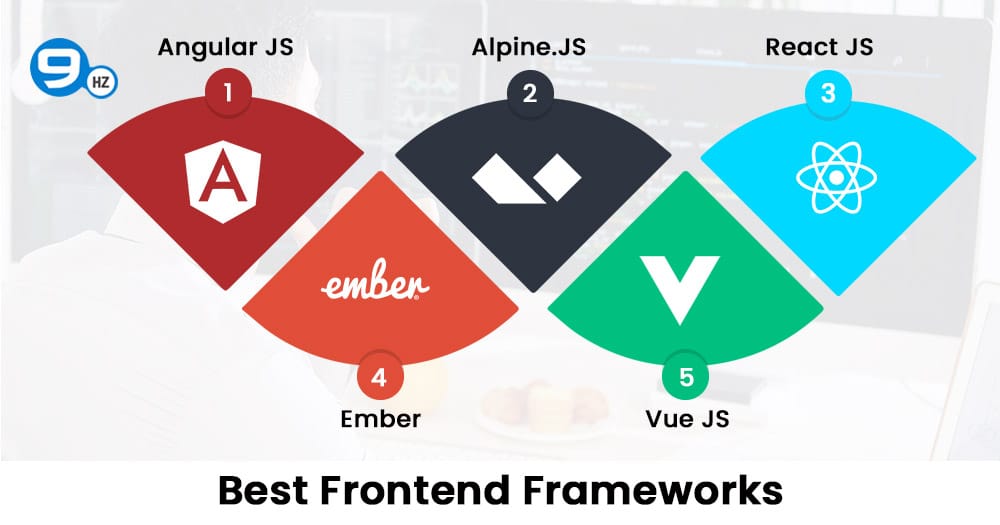 A frontend framework is in charge of what users see on a webpage. HTML, CSS, and JavaScript are the three primary tools for creating a frontend framework. Here are the following five frontend Web Development Frameworks which are mostly used in 2021.

Angular is the most popular web framework that is built on JavaScript, which can be used to create frontend applications or frontend components of full-stack web applications. Google created Angular, which uses the TypeScript programming language, which encompasses all JavaScript does and much more. Angular includes a robust command-line interface (CLI) that allows you to build components rather than manually create them.

React is the best framework for web development 2021, which was created and is maintained by Facebook; it is technically a front-end library rather than a traditional framework, but developers frequently use it as a framework of sorts. It was the first framework to use a component-based architecture, which was later adopted by famous frameworks such as Vue and Angular, both of which are on this list. React can be used both server-side and client-side. You must read a comparison blog on AngularJS Vs ReactJS.

If you want to create a highly interactive SPA, we recommend Vue, React, or Angular. Alpine is the most popular web framework and is preferable if you work on a small project requiring only one or two components. AlpineJS is regarded as one of the best web development frameworks, particularly for server-side applications. Alpine is popular among developers because it leaves the app with a small footprint.

Vue, a new open-source front-end framework built on JavaScript, is one of the most promising technologies for creating user interfaces. It is much lighter than other frameworks, making it ideal for dynamic projects and single-page apps.

Vue has a highly customizable and flexible design that allows it to be readily integrated with third-party applications. You can choose from various components, such as using Vue as a library to augment your existing app or as a full-featured framework. You might be interested to explore the comparison guide on Vue.js Vs. Angular Vs. React.

Ember is another open-source Web Development Frameworks to keep an eye on. It can assist you with developing modern user interfaces not just for web solutions but also for mobile and desktop programs that will work on all devices. Ember makes use of the MVVM paradigm.

Ember has a crucial feature in that a testing program is built by default for each new entity. When you use Ember, you can always count on an ever-expanding community of talented developers to release new features and improve the platform. 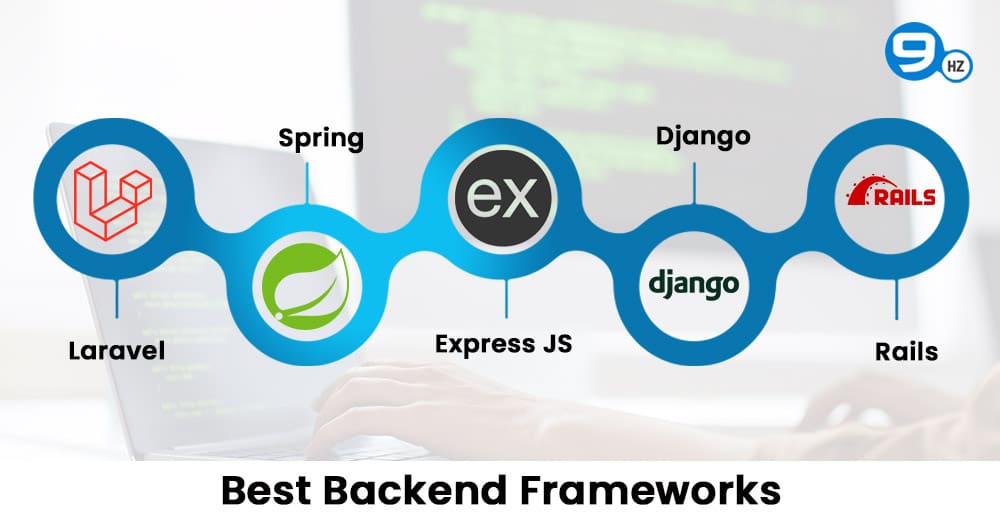 Going ahead, the list below indicates the top web development frameworks 2021 to use for backend web application development. Take a look.

Django is a Python-based Model-View-Template web development framework. Python’s popularity has risen tremendously, which has had a direct impact on Django’s quick acceptance. It follows the DRY pattern and the Convention Over Configuration pattern.

Django provides developers with approaches and tools to assist them in creating a secure website, or it incorporates security within the framework itself, such as preventing code execution in the template layer. Furthermore, Django has several powerful capabilities that set it apart from other backend web development frameworks.

Express is one of the best web frameworks available today. Its success among major organizations can be attributed to the platform’s flexibility and simple aesthetic. Furthermore, it is an open-source framework for the Node.js environment, and Node.js is in high demand nowadays.

Express is developed in JavaScript and includes tools for developing online apps, APIs, and mobile solutions. It is compatible with third-party frameworks.

Laravel is a Model-View-Controller framework that uses the most recent PHP technologies. It was created with the intention of making the development process more fun. Laravel offers a beautiful syntax that simplifies basic chores like authentication, routing, and caching. It may appear complicated at first due to the extensive documentation, but once you get the feel of it, designing the backend of an application will be a breeze.

Pivotal Software’s Spring Framework is one of the most popular web frameworks. The Spring framework, which is built for the Java platform, allows you to create simple, flexible, and quick applications and systems.

Despite the fact that it does not require any specific programming pattern, this backend framework has gained prominence in the Java community with the advent of the Enterprise JavaBeans model. A Java program can use its core functionality, but extensions aid in creating apps on top of the Java Enterprise Edition platform.

Ruby on Rails is a server-side Model-View-Controller framework that is interoperable with popular front-end frameworks such as React or Vuejs. The key premise of Ruby on Rails is that each snippet should have a single submission within a system so that the code is cleaner and performs properly. As a result, developers write less code and hence develop more quickly. Ruby on Rails includes built-in security features to protect against threats such as Cross-Site Scripting, SQL Injection, and Cross-Site Request Forgery.

Here you have come to an end: the best framework for web development 2021, with which developers are entrusting their projects. You can safely use any of these web development frameworks, depending on your specific requirements. 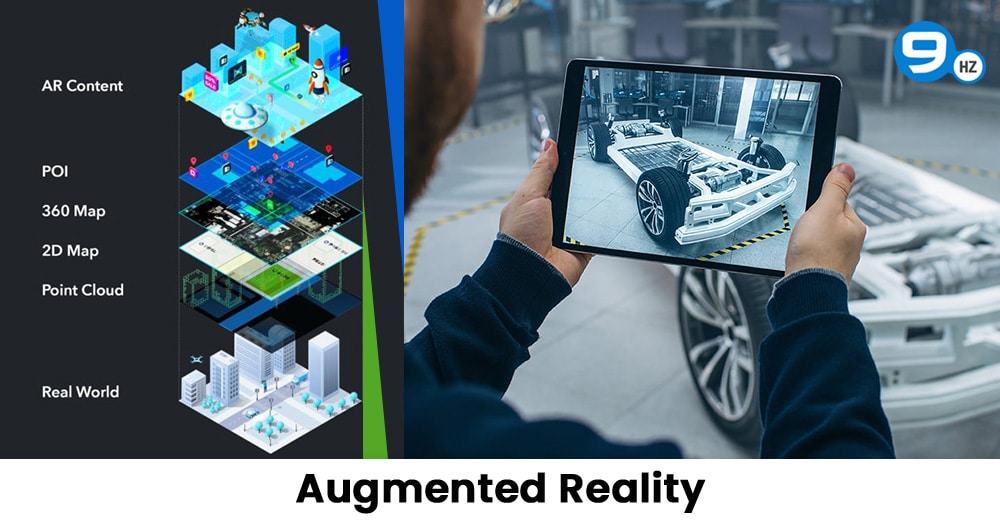 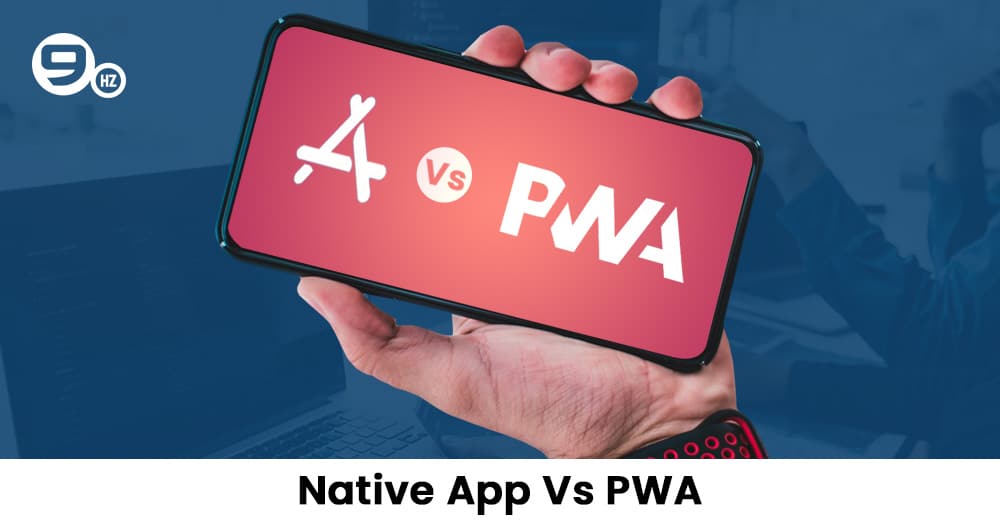